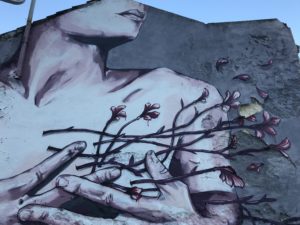 You wake one morning
with a swan’s wing for an arm.
Lopsided you move to the window;
there is wind and rain over the marsh.
Autumn flocks are flying.
You stretch, unevenly.
Your children, your mate recoil,
their words a gabble around you.
You have no taste for food,
nor can you hold a fork.
Plates, newspapers slip to the floor.
You open the door, reading weather,
trying to remember: just how you reach,
how you find your way into the sky.

Good morning, good morning, and happy April. It’s raining here this morning, which seems appropriate, what with April showers bringing May flowers and all that. The puppy is curled up in a ball in her chair – she was not a fan of our damp commute across the lawn this morning. When the space heater goes off, I can hear the rain falling on the roof, and I sit with it for a few minutes, the pattering, the voice of the morning, while the eyes of the morning flicker in front of my keyboard.

April is both National Poetry Month and Sexual Assault Awareness Month, and so some years ago I realized that sort of made it Writing Ourselves Whole Month (or WriOursWhoMo (like NaNoWriMo, of course)).

Yesterday I decided to go through the poems that I used in writing groups once upon a time and gather up some of my favorites in order to dive into them again over the course of this month. Most of these are poems I used more than once during the fifteen or so years I lead groups in California. They are poems that worked well as writing prompts, whose language, lines, imagery caught something in each writer, sparked a story or a poem or a wandering on the page, opened a door through which each writer could drop more deeply into her own words and process, her own imagining. So I’d reach for them again and again, wanting a new group of writers to be able to experience their magic as well. With only eight sessions in most of the writing groups, I could only share a limited number of poems with a group, which made me sad. I wanted to share what these poems had given to me: the stumble and surprise of the language, the shock of connection inside the metaphors and imagery, the catch of breath at the poem’s close, the profound sense of presence with something new being named in the world.

I can’t remember where I first read Sheila Nickerson’s “Fairy Tale,” but I remember knowing upon first read that it would work well as a prompt. Just look at that central image: a woman standing at her front door, a wing for an arm, trying to remember how to fly. Behind her, the house is a mess – dishes have fallen from the table, she can’t gather up papers or pieces anymore, and the wing is so new that she can’t yet think how to do what she used to do with two hands, two arms, now with this wing in place of one. She has changed. Some of her inside has come out, her secrets are becoming visible, the difficult and wild parts of herself that she has tried for so long to hide can be seen by the people she loves, by the people she has tried to hide herself from, and they are afraid. They don’t know what to make of this new mother, this new wife – why isn’t she what we’re used to? Why has she changed? Why is she different? Hers is a difficult magic that they can’t yet understand, and maybe they don’t want to – she’s not supposed to be the magic one; she’s supposed to set the table and keep the house neat so that their magic can more easily rise and shine.

The poem speaks to a you, and because this reader is a she, when I read this poem, the you in the piece is a she. Maybe the you in your reading is a he, or a they. In the poem as it arrives in me, there’s a she standing at an open door that looks out on an autumn marsh, and that woman watches compatriots, old friends she’s lost touch with, beloveds from long ago, flying away, high in the sky. It’s been so long since she’s gone with them; her body can’t remember yet how to get to them, how to make the motions and the sounds she used to know intimately. Something she’d tried to push down, push away, push inside, something she’d tried to forget about and do without is emerging again. Something is calling to her (like the wild geese, harsh and exciting – that one will come later this month).

In the poem, we don’t know if the you is consternated or afraid. We don’t know if the you is excited or hopeful. We watch the humans around her pull back; recoil has a look on its face: disgusted, confused, shocked. Her children and mate are standing away from her, and so she stands at the door alone. And the flocks flying are high away from her, far. They are dancing their own familiar dance, they are not waiting for her to catch up. She has to remember alone, with no one to help her, with no one to pull her forward or whisper in her ear the magic words that will unlock all that she used to know.

When I read this poem, I see her caught between these two worlds, feet still firm on the ground, one hand on the door, and the feathers of her wing fluttering in the autumn breeze, unfamiliar muscles tightening and loosening – she is trying to remember how to reach. It has been years since she reached, since she stretched, since she took that risk. She remembers she wants more than this house with its inhabitants, more than a box with newspapers and plates, she once wanted the whole sky, everything above and below it, and she is remembering that she used to know how to have it. In the poem, she has not come fully back into her old skin. The process is just beginning, but it is beginning. It is a frightening thing when the wild in us, wild that we have tried to civilize and shunt away, reasserts itself, when we wake with an animal rage or grief or joy. Why are we still taught to fear our wildness, our feathers and fur, our sharp teeth and claws?

Today I will walk on the beach in the rain. Yesterday, as the sky was pinking and oranging at dawn, I lifted my eyes to the seagulls circling and crying overhead and caught sight of an enormous pair of wings crossing the beach and flying into the neighborhood. Still tingling with a delighted shiver in response to such a wild visitation, I walked up to the sidewalk and down past the trashcans and the signs encouraging all visitors to the beach to be kind to one another during these covid times, and, looking onto the roofs, I saw her, fat and white there next to a brick chimney: an owl. She sat there for a while, as crows and gulls sort of flew in her direction, circling and diving-ish but never really threatening her. She turned her head this way and that, and seemed every now and again to be looking right at me – though really that could only have been my imagination; I was too far to know whether she saw this stick figure on the ground, or whether she cared about it. She was looking for breakfast, and looking to stay safe.

I’ve wondered for all the months I’ve lived here whether there are owls in these marshlands, or in the woods on either side of the beach. On the roof, the owl sat quietly, no calling out to anyone, no hollering at the other birds bothering at her to go away. I wanted to stand with her, watch until she flew away, get one more glimpse of those huge wings the fingers of her feathers spread wide to catch the cool morning air, but the puppy was staring at me, confused and insistent – but it’s beach time now, and that means you move this ball and I go after it and catch it in my mouth and run it back to you and then you move it again now, right? Why are you up here on the hard ground and not on the soft ground down there? So I went with my familiar back to our walk on our morning beach, amid mussel shells and huge clam shells and razor clam shells and broken sand dollars.

At some point our owl flew away – I didn’t see her lift into the sky, and I don’t know what direction she went. But I know she is here, she lives near us, she is among my wild neighbors, and that is enough for now.

What comes for you when you read this poem? What images, what stories, what songs or griefs? I’m going to do that thing again and invite you to give yourself ten or fifteen minutes on the page with your own words, your own wildness, the magic of your own fairy tales. Follow your writing wherever it seems to want you to go, even if it surprises and startles you – maybe especially if it surprises and startles you.

And be easy with you today, ok?