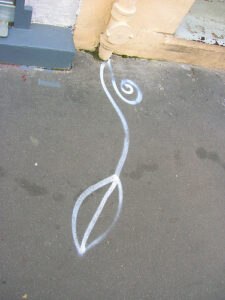 Good morning, good morning. It’s early morning in Boston, where it doesn’t really ever get dark – there’s always light from the nearby buildings, the cityscape. I’m not awake yet and I want my tea. My feet are chilly but it’s too warm in the radiator apartment for the wool socks I brought down with me. My car is on the street here – it’s strange for city life to begin to feel foreign. Across the street from me is an MIT frathouse, an old heritage building, probably once a single-family mansion now turned into dorm plus gathering space for the smartypantses of America. On the second floor, there’s a huge window shaped like a bishop’s hat, stained glass amid interlocking arches at the top, and through this I can see a faded oriental rug, dark wood floors, bright lights, a couple of benches. I can’t help wondering how many times that rug has been thrown up on, cried near, how many feet have pressed soles into its shortening naps. I can’t help wondering what that rug has seen.

Think in ways you’ve never thought before.
If the phone rings, think of it as carrying a message
Larger than anything you’ve ever heard,
Vaster than a hundred lines of Yeats.

Think that someone may bring a bear to your door,
Maybe wounded and deranged; or think that a moose
Has risen out of the lake, and he’s carrying on his antlers
A child of your own whom you’ve never seen.

When someone knocks on the door, think that he’s about
To give you something large: tell you you’re forgiven,
Or that it’s not necessary to work all the time, or that it’s
Been decided that if you lie down no one will die.

I have never been much of a fan of Robert Bly. He wrote a book called Iron John that sat on my father’s bookshelf in his rented living room once upon a time. I don’t know where I first heard that Robert Bly was a sexist – I don’t want to go googling that now and fall down an internet rabbit hole of anger and dismay. Suffice to say I had that idea, so it was hard for me to use this poem in workshop. But it was such a good one for a writing prompt: each specific image could spark a story (a ringing phone, a wounded bear, a moose with a child in its antlers, someone knocking at the door). But then there are those large, evocative messages at in the final verse, like exhalations. What if someone arrived at your door to tell you you were forgiven, or that it was ok to stop working for a while, or that you could rest without being a failure, without falling apart, without dying? Who could be bearing such a message that you could listen, that you could hear it, that you could allow the words, that you could welcome them into your body and your understanding?

Surviving sexual trauma is a story, it’s a story that we tell ourselves. Not wholly a story – depression and grief and rage are chemical, too (though we could also tell stories about those chemicals) – but as human beings, we know ourselves through stories, through the stories we have been trained to believe, the stories we have been told from birth and even before we were born, from the stories that are carried forth in the news, in our children’s books and history texts and tv shows and movies, in our mythologies: national, community, familial. There’s the story of boy and the story of girl, the story of woman and the story of man (one of those is individual, and the other is all of humanity). The stories we know shape what we can think about ourselves, about our experiences, about what’s possible for our lives. In one way, we are living in a time of story, with the broadest possible access to the stories of the world of any human beings in history. And yet, many of us are still getting and internalizing the same stories that our grandmother’s grandfather’s grandparents’ got: what a man is, what a woman is, what freedom is, who gets to have autonomy in the world, who gets to be in the world fully free.

The first line of the Bly’s “Things to Think” evokes for me one of the core messages of Writing Ourselves Whole: changing our language can change our lives. That’s the idea of restorying. It can be a terrifying thing to think in a way you’ve never thought before, to allow yourself to entertain an idea that you’d previously disallowed, that was anathema, that you had been taught was dangerous or impossible. I can speak for myself: each time I’ve allowed myself to listen to an idea or a thought or a story that might uproot my life, of course I was terrified. It was always safer to push those thoughts away, even if, to allow them in and give them room in my mind and body and feed them and water them, they might grow in ways that would change my life for the better. That change was dangerous. It was unknown and frightening. It would require new action from me – and I couldn’t see what was on the other side of those actions. If I let these thoughts in, I couldn’t keep living the way I’d been living, but I also felt so stuck that I couldn’t see any other way forward for me. There’s a kind of death in those moments, in the shedding of a long-worn skin, in the breaking of the glass that surrounds us when we are held in thrall to an idea or story about ourselves.

A few weeks ago I wrote about cognitive dissonance, and that’s some of what I’m thinking of here – those moments when we begin to hold mutually-exclusive thoughts: for instance, I am a weak and unenlightened woman-person who has to learn to let go of her hangups if she ever wants to grow brave enough to see the truth about the world and join the coterie of powerful elites who control it – or, no, maybe I’ve been being sexually abused by a man who has just been telling me a story about being a member of the CIA with access to a multinational network of wealthy and powerful men who really control the world (who could therefore watch my every move and listen to my every word and punish me for betraying him if he ever asked them to).

But recently I’ve also been thinking about another set of stories, the stories I carried about this woman’s body I live within. Have I told this one before? Of course I have – but I’ve been thinking a lot about sex and gender recently, and so this story has been on my mind: When I was in my early twenties, either just away from my stepfather or just about to be, I had a moment in the bathroom of the off-campus apartment I was subletting while I was looking at my face, aware of its ugliness, as I’d been trained to do as a teenager (both by my stepfather and by every magazine that existed). Look at the bags under my eyes and all the various discolorations, the big pores, the dry spots and oily zones. I hadn’t put on any makeup yet. I’d been wearing a full face of makeup for much of my teen years and much of college: base, powder, blush, mascara, lip something. Cover it up, make it pretty. I was one of the very few women I knew in college, among my friendgroup, who did this. There were many beautiful women in my acquaintance who did not wear any makeup, who let their faces be free. Why was I the ugliest one? What if I wasn’t? That was the unthinkable thought. What if I wasn’t ugly/ What if my face wasn’t ugly when it was uncovered? What if my face was just my face?

Here’s what I knew for sure: I can’t win at the girl game. I’ve been trying my whole life, and I just can’t get it. I spent so long feeling like I was doing every part of girl wrong – and so what if I just stopped trying? I could walk away from this battlefield that we’re thrown onto as girls so early in our lives – battling ourselves, battling each other. What if there was another way to be a woman in the world that wasn’t about constant competition, measuring ourselves up against the pretty polished pictures on the covers of magazines (or coming out of Tri-Delt)? What if we could take all of that energy (and it’s a lot of goddamn energy) and redirect it elsewhere? What if we could just be people with creative dreams and lusts and hungers and questions that drove us into our days with curiosity and delight? If I give up, do I just get to be like everyone else (that is, like men)?

I was a senior in college and my life was about to fall apart completely, about to take a sharp left turn, because I was going to say no to the man who’d been raping me. I was not going to go home for the winter break, and I had a real fear inside me (that persists to this day) that I was going to die for this sin.

I have not yet died for thinking that new thought or for changing my life in accordance with any new and previously forbidden way of thinking. Instead, each time, my life has grown and opened in ways I could not have imagined before. In recent years, some of these transformative thoughts have been: maybe femme is a costume I’m wearing, just like I wore butch, and it doesn’t fully fit me either; I don’t have to keep actively carrying around the impact of the violence done to me, so as to act as the evidence of an already-convicted man’s crimes; my “hustle” might not be liberating me – it might actually be causing me a lot of harm – and putting it down doesn’t have to mean I’m a failure.

There are still new and frightening thoughts ahead of me – I can only hope that’s true.

What are things you are thinking today you’re not “supposed to”? What are you thinking that you were trained not to think, that you have been told was dangerous or damaging to think? Can you give some space on the page to those thoughts today? The page is yours alone, not for anyone else to see. Give those thoughts some time to run free — ten minutes, fifteen, or even twenty – and follow your writing wherever it seems to want you to go. Then close the notebook, shut the laptop, turn off the phone – you might even have to tear out the pages or delete the document. I don’t want you to do that, but I understand the desire, and have done it myself once or twice. (I wish now that I hadn’t, but at the time, there was no other way for me to be able to write those things down, and the writing was an act of liberation in and of itself.) In any case, be easy with you today, ok? And keep practicing allowing new stories in, allowing yourself to think free.