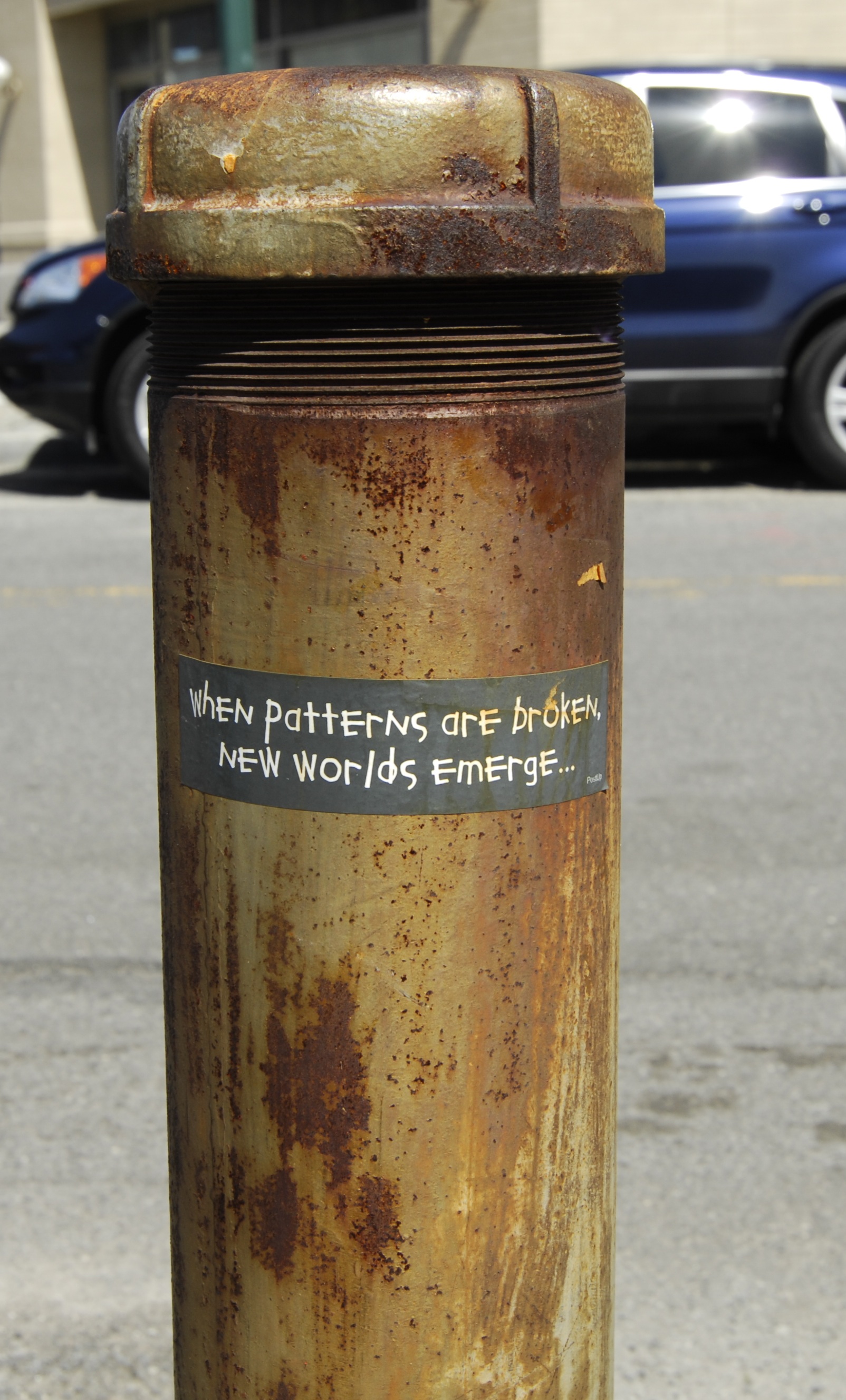 For instance, consider the story inside the word broken as it gets applied to survivors of violence. Broken is commonly incorporated as a metaphor into survivor stories – he left me broken. He ruined me. She left me in pieces. He tore apart my soul.

I climbed into this fragmented narrative, this narrative of fragmentation, when I began to identify as an incest survivor. Identity is a story: we don’t just take on a label when we identify as something, we take on the narratives that accompany that identity – we have to interact with that identity’s story. The incest/trauma survivor story contained these: “broken, ruined, dead.”

These are powerful phrasings, necessary to use to describe how the body feels, how the victim feels, how the raped child feels when she is violated by someone neat to be a protector, when she is physically and psychically assaulted, then silenced, shamed and threatened, then psychologically tortured so that she will comply with the abuser’s demands of silent complicity. We need a brutal narrative to match the brutality of our inner experience. We need a story that will wake people up, we need a story that will make standers-by understand why we need help. We are attempting to counteract and supplant the other, deeply entrenched stories: the child is the parent’s possession to do with as the parent wishes; children often lie and are not to be believed when they say their parents or other adults are hurting them; child abuse is a family problem and outsiders should not intervene; children often invite sexual acts; America puts women and children first – those stories hold powerful sway, culturally. It makes sense that with the rise of an Incest Survivor advocacy community, we would reach for language as incendiary as the experiences and silencings we suffered through: he might as well have killed me; he left me for dead; I felt like a ghost; I didn’t exist anymore.

Broken was big enough to explain how I felt. Broken was also irreversible. A shattered vase might get glued back together but you can always see the cracks, the scars – and that vase was now weaker, easier to break the next time. We were broken and proud of it. Fuck you, we said. We might get better, but we were never going to be the same. He ruined us. He broke us. He stole our childhood. He stole my adolescence. He broke my sex and now I would never be normal.

These stories express our extreme disenfranchisement from our own agency. And we tell them over and over and over – and, each time we tell the story, we deepen its neuronal pathway inside us, making it easier and faster for us to tell again the next time.

Just a few years ago, I began to question: What if that story was a lens that I was looking at my experience through? Certainly I’m using broken metaphorically, to express my sense of internal fragmentation, and of not being a normal and regular (which, my necessity, means unbroken and whole) woman. Aren’t I?

What if there was another story, another lens I could look at my experience through? What if broken didn’t have to be my name? What if I am whole, my sex is whole, my complexity is whole? What if I struggle, still have questions, but am whole, intact?

What if I could tell a different story?

“The truth about stories is that they’re all we are.”

Taking a stand against a cultural story and meta-narrative is resistance work, builds muscle.

In learning to live outside the lens or silo of Broken, I am flung (if I’m not careful) headlong into the relentlessly cheerful Gratitude story: whatever doesn’t kill you makes you stronger.

What if I didn’t want a cultural narrative, a grant application anecdote, a Hallmark card, a cup of soup for my soul? What if I was ready for a less-than-simple story, something more complex, more complicated, more real; something less pithy, less easily told?

In our survivors writing groups, this is what we hold open room and hold out hope for – the messy story, the fragmented telling, the rape story with jokes and laughter in it, the story of the loving parent who put his hands inside his child, the story of turning still for support to the mother who abandoned you – the stories that friends, surveys, some therapists, family, nonprofits, social workers, activists and advocates have a hard time hearing (literally comprehending) and holding because these stories don’t match the language we have acquiesced to as a culture: ruin, devastation, dismal, hopeless, broken.

Our human, lived stories are more complicated than one lens can reveal.

Outside of one story are a hundred other stories. Outside of Broken is frightening, still – I feel uncontained, sprawling. I also experience myself as having greater agency. Not broken or unbroken, intact and imperfect. Wounded, sore, struggling, whole. Human, like all the rest of the humans around me struggling with something.

Thomas King writes, in The Truth About Stories, “Stories are wondrous things. And they are dangerous.”

What is a story? It is a rehashing of events, a narrative, an anecdote, a lie, a truth. The dictionary isn’t helping me here, just giving me synonyms. What is a story? It’s a telling or a making up. It’s offering an account of an experience, so someone else can can come to know or understand what happened. It’s a fabrication, a weaving into existence something that wasn’t, that didn’t exist, until we put it into precise words.

Story is contextual. And who determines a story’s context? “She’s telling stories” is the way some folks call us liars. But we know what truths come from storyteller’s mouths.

Thomas King also writes, “The truth about stories is that that’s all we are.” He repeats this line throughout his slender book, driving the point home: we create ourselves, we know and understand ourselves, through the stories we tell and/or listen to and believe about ourselves, about those like us, about our communities, society, families, world.

Yes, the body is also bone and tissue, chemical reactions, pulses, electrical leaps. The body is fluid and organ, is emergence and excretion, is breath and heartbeat. The body exists as an object in this precise moment, entirely independent of its context, its historical situation, its experiences. Doesn’t it?

Would this body be what and how it is independent of the stories I have told about it? What is my body without its stories, its histories and herstories? What is yours?

Is my DNA a story? My musculature? What can you learn from the story of my skin, her scars and stretch marks, her stains and curves? What can you read in the complicated interweaving of my neuronal infrastructure (which would be transformed if the stories of my body were transformed)?

Every story is an illumination and an occlusion. Every story highlights one side of a situation while leaving out other information. This is out of necessity. We can’t remember or apprehend every detail of a happening or an experience. We remember what’s important – we tell what we remember and, over time, what we remember is what we’ve told repeatedly. We believe our own stories. We can forget that there are other ways to tell, understand, consider those stories – and each different telling provides a different lens through which to consider ourselves and our experiences.

Comments Off on opening to new stories

thoughts for a Monday Something from this weekend:

Living on the edge means recognizing those places and experiences that do not offer me easy answers, those fierce edges of life where things are not as clear-cut as I hope for them to be. There is beauty in the border spaces, those places of ambiguity and mystery.

The Nigerian storyteller Ben Okri says that “In a fractured age, when cynicism is god, here is a possible heresy: we live by stories, we also live in them. One way or another we are living the stories planted in us early or along the way, or we are also living the stories we planted — knowingly or unknowingly — in ourselves. We live stories that either give our lives meaning or negate it with meaninglessness. If we change the stories we live by, quite possibly we change our lives.”

– The Truth about Stories: A Native Narrative, by Thomas King.

One time, twice, once in awhile, I get it right. Once in a while, I can make the world I know real on the page. I can make the women and men I love breathe out loud in an empty room, the dreams I dare not speak shape up in the smoky darkness of other people’s imaginations. Writing these stories is the only way I know to make sure of my ongoing decision to live, to set moment to moment a small piece of stubbornness against an ocean of ignorance and obliteration.

Why are you writing this morning? Give yourself 10 minutes to start your week out with words: what are the stories that need telling from last week, from this weekend, from your dreams? You might also write from any response you have to the image above, to one or more of this morning’s quotes: follow your writing wherever it seems to want you to go. Begin this week with your words!

Comments Off on thoughts for a Monday