femmelove: you can only carry yourself with your own fierce grace

Posted on April 16, 2014 | Comments Off on femmelove: you can only carry yourself with your own fierce grace 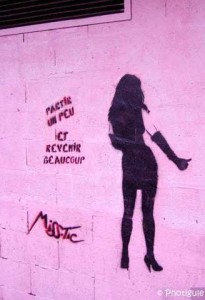 One day, you will awake from your covering
and that heart of yours will be totally mended,
and there will be no more burning within.
The owl, calling in the setting of the sun
and the deer path, all erased.
– from “One Day,” by Patricia Jabbeh Wesley

Good morning good morning. I’ve been up since 4, seeing my sweetheart and her boy off on an adventure. The song sparrows found the sun long before the light crested the edges of the hills. I woke up tender this morning, struggling with old resentments, struggling with how long it can take to release myself from blame, shame, and guilt, struggling with how easy it is for me to get called back into shaming myself for old ways of being, for not growing or healing faster than I could.

I got a communication from my ex last night and it’s got my hackles all up. Never mind that it’s a straightforward question, nothing overtly hostile or shitty. He never was overtly hostile or shitty — just passive aggressive and ostensibly clueless. We rarely communicate because he asked that we have no contact, and then proceeds to contact me whenever he feels he needs to. So it is that I continue to erupt with feeling whenever I see his name in my inbox or on my text messages: old resentment, directed toward him, sure, but more directed toward me and the self I was when we got together, the self I was throughout most of our relationship. I want to have done things differently from the beginning. I want not to have needed as much time as I needed in order to finally stand up for myself and walk away.

What do we do with big anger, with the old resentments, with the heat of disappointment and shame that still sits in the body? What to do with the who I was when I was with him, who I allowed myself to delove — I mean, devolve — into? How it is that I came to the place in my life that I could say: He promised to change; I should give him another chance. How did I become a person who’d use language like that? How do we tend to the wounds of those we love without becoming wounds ourself, without believing that we are saviors, without capitulating to the lover’s siren song, the one that says, Please fix me. You’re the only one who can.

Never trust that song. It is a lie. It is the song of a wounded animal, the song of a wounded child who only wants someone to pick them up and love them well and treat them like a beloved thing in the eyes of the sun. It is a powerful thing to have someone turn the sun’s eyes on you, to have someone tell you that you are the only and one best thing that can save them — you are the only one who understands — you are the only one who can kiss it and make it better. But you are not their parent. I was not his mother. My job was never to be his mother. My job was never to contort myself so that someone else be more comfortable in the world. And still I put that task on my shoulders because I wanted to be a good femme.

I tried to reach for comfort inside the context of his disassembly: he could have have put the pillows and a blanket on the floor and said to me, If you want to be a good ally to me, you’ll sleep there. I would have. I wanted him to know that I was a safe space, that I got it. I knew that he had suffered, and I could make it better. Wasn’t that what I’d learned from Stone Butch Blues? A femme’s job is to stand by her man, hold all the secrets, and suffer in silence.

So, when the old rage and resentments flare, I rant a little, and then I check in with myself: What’d I need to learn from this relationship?

How to hold my own boundaries as sacrosanct. How to listen to the no that rises up in me like wildfire. How to trust that every other person has their own higher power, their own resources and capacity to take care of themselves, to trust that I was not put on the earth to make sure that any other adult is reparented well or gendered appropriately.

The thing I want to talk about is wounded butches and rescuer femmes. I kneel down into the bed of my psyche, push in tender fingers and pull at that woven bed of matted, invasive root structures: I do not exist to ensure that anyone else’s life is worth living. I cannot not be the mother you did not have. You could not be the father I did not have. I am not your perfect femme, the one who turns herself out to make sure the world sees you as you wish to be seen. Of course, he would say he did not ask for this — and he didn’t. I asked it of myself. This is the mire I get stuck within. My job was to fold myself in such a way that he could rise up and over. Do you see? Let me be the visible dizzy girl when we are out in the world together, so that the world will see you as that girl’s man. The world is looking for that girl to have a man. Never mind that I didn’t want a hero. Never mind that I didn’t want a man. I wanted a lover and compatriot. I wanted a friend and companion. And oh, I wanted to be the best ally. I wanted to be the hero. Yes, of course. A big sister who has failed her little sister wants to hero something successfully, and I tried to hero my ex-wife (when I wasn’t asking that she hero me), and then I tried to be the best hero femme for your tender angry scared wounded butch.

Where is the conversation about how we hold each other up and also demand that each of us gets the support we need outside the relationship? That’s not the question I want to ask. Where was the femme community telling me I didn’t have to be the good femme, I didn’t have to be the Leslie Feinberg tragic heroine suffering in silence at the kitchen table with a tumbler of whisky while my lover recuperated in the other room after yet another tortured encounter with the heterosexist, transphobic, racist, classist outside world?

If you are a femme asking these questions yourself, I want to tell you that you don’t have to be that silent sufferer. You don’t have to be the carrier of all the secrets. You are more than just the body that displays someone else’s masculinity and manhood. You are more than the quiet and slight that someone else can be big and loud in opposition to. You are more than her femme or his femme or their femme: You are more than a possessive or a thing possessed. You are more than your guilt or shame or sorrow. You cannot fix someone else’s woundings by making yourself small. You cannot fix someone else’s woundings at all. You can only carry yourself with your own fierce grace. You can only follow the tender violet callings of your own broken open heart. Yes, if you are a lover of butches, you will watch them get hurt in the world — but it is not their right to demand that you make everything better (even if they are not aware that they are making that demand). Your love will not change the world. Your love will not change them. Only they can change themselves. Listen to them tell you they will change — once. After that, pay attention to what they do, rather than what they say. Find femme support and listen to the innerest voice of your heart and your gut. Your instincts don’t lie to you, even when you don’t want to hear what they have to say. It took that relationship to teach me that I could trust my instincts. I wish I could have learned that lesson differently, and yet I am grateful that I learned it as soon as I did.

This entry was posted in Uncategorized and tagged anger, femmeluv, letting it come, old love, radical self acceptance, WriOursWhoMo. Bookmark the permalink.