the pieces we can’t forget 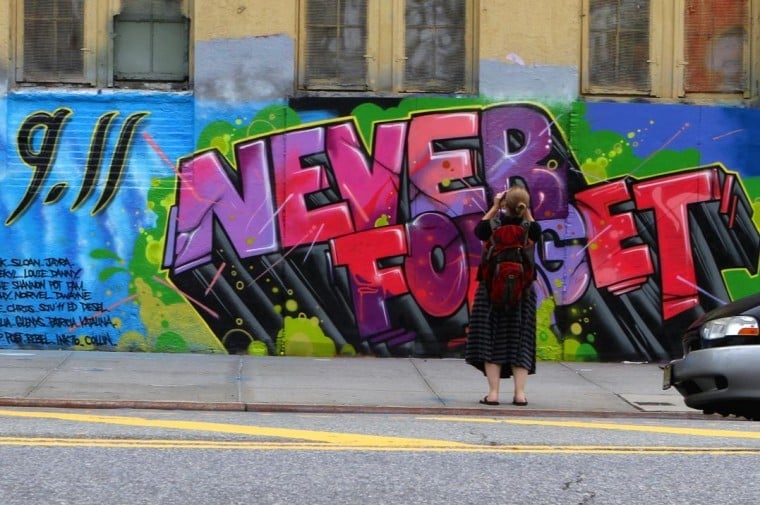 Here is a morning blog for Tuesday, September 11 — this will be the big question today: Do you remember where you were when you first learned that airplanes were flying into the twin towers, the world trade center in New York City? I was on a rural route in Maine, driving in to Portland, headed to the Borders where I did an enormous amount of my writing during the years I lived there. At the time my then-partner A. was pregnant and I was a new grad student, had only just begun my MA program — I had come back from my first residency immersed in a crush, in love with what I was beginning, terrified about us having a baby, so scared that I would lose myself and any possibility of actually doing the work I was meant to do in the world… if she had that baby that I asked her, not long after returning I think, if she could have an abortion. I actually said those words. Who says words like that? Who is that selfish? Do you know how much effort, how much work, went into us getting pregnant, how expensive to bring home those little vials of washed sperm that we would suction into syringes and inject? We packed travel coffee mugs with snow or ice and carried the baby-making stuff home that way. It was months we tried, just like any other couple who wants a baby, except many of them, if they are heterosexual and have parts that function the way they are meant to, don’t have to first go to the doctor’s office to buy the raw materials. So 9/11 came after my own implosion, after I detonated something terrible between us, in the middle of this marriage that was supposed to be perfect and forever. How can I be talking about this, telling this personal story, on a day of national remembrance? Because that day, it was a big deal that the first thing I worried about was where my then-partner was, if she was safe. You remember we were afraid we were under attack, we thought planes would be falling from the skies all over the country — A. worked right near the airport; who was to say that someone wasn’t targeting every town? I was listening to NPR while I drove in that morning; fall was just beginning in northern New England, the day was enormously, almost offensively, brilliant and blue — wide open and gorgeous. And then the newscaster, which one was it, a man, was talking about planes going into the first tower. I pulled over into a gas station, I remember the gas being just around a dollar a gallon, maybe a little more. I just sat in my car and listened, frozen. What were we going to do? Did this mean we were going to war, that there would be war in this country, here on this land?

Have I written about this since that day, since the packets of work I was sending to my advisors at school? I was in a distance-learning program, and had to read several books, write and send about 25 pages of material every two or three weeks — how did that go? Of course, it being an integrated and somewhat woo-woo program, I wrote about everything: the books I was reading, sure, but about my marriage and our pregnancy and this impending baby and how everything was going to change and how terrified I was of losing my life or breaking this child and then about these planes and the way the country began to go crazy. We haven’t ceased in our craziness; we have acclimated ourselves to endless war. How does a people do that? How do we justify that?

That morning, she was at work, and I wanted to be with her. We were at tremendous odds; something had split open in our togetherness — I had shoved the knife in. I have no excuses for it now. I drove that September morning the rest of the way in to the mall, where the Borders lived, and I pulled into the parking lot and went in and ordered my cup of coffee. The young woman behind the counter wanted to talk about what was happening. The parking lot was empty, and the skies got quiet — no planes, almost immediately. Everything was grounded. I got hold of A. somehow — I can’t remember having a cell phone already, but I may have by then; maybe I just used the pay phone back by the water fountains, dropped in my quarter and dialed her number. Where are you? Are you safe? Or maybe it was that we didn’t talk at all, she just drove over to the Mall, knowing I’d be there. Did we still have two cars then? Why don’t I remember these details? What parts of a traumatic day stick, and which ones slide down through your consciousness, slip away? I could go back through the journals I was keeping then, get the full story. That’s interesting work, too — noticing how my memories jog up against what I recorded then, what “really” happened. Every story is an elision as well as an enlightening; something has to be in shadow if/while we’re revealing a particular side or detail.

She came to where I was and I was so grateful; I thought, yes, this is how it’s supposed to be. We’re supposed to be together at a time like this. No one knew what was going on inside of us: not the baby, not the breaking. It was a big deal, is what I’m trying to tell you, that I ached for her that day and that she came to where I was; something of that rupture healed in that act, or, if not healed, there was a bridge we made across what was torn in order to keep reaching for each other. Eleven years later and I’m still trying to understand who I was then, what was it in me that had been so tamped down or hidden or closeted that was just beginning to emerge, just becoming re-oxygenated, that I would act so atrociously. What would it mean to forgive myself for that action? I am not quite there yet — because then the baby didn’t live. Two months later we found out that he was formed in such a way that wouldn’t have allowed him to live outside of her, and we had to let him go. And there is the story of that loss, the story of those days, the story that lives inside of me that I asked for that outcome and the universe delivered it to me. I told her, over and over, while we sobbed, I didn’t want this. I didn’t want for this to happen.

On 9/11, we sat at the mall for awhile–didn’t we?–and I was terrified. Everything was coming apart, even the country. Eventually we went home, and one of us turned on the tv, but I couldn’t watch, didn’t want to see the images, the pornography of terror that the networks filled our screens with — over and over, the planes flying into the buildings, the buildings crumbling, people leaping to their deaths from tall windows: it was bad enough to listen to it; I didn’t want to see them, didn’t want those images to live inside me. What did we do that day? We sat by the radio. We made meals. We went online. We were afraid for friends who lived in New York and Washington. We waited for what was going to happen next.

The slogans say, never forget, and I don’t. Those days of the country’s confusion and anguish are tangled up with my own. What hubris. Here we were meant to be coming together, reaching out for each other, and I was digging deeper inside instead.

This is a morning write. 9/11 happened eleven years ago. Where were you, or your characters? Where were you eleven years ago? What were you doing then that you thought you’d always be doing? What loomed before you that actually came to pass? What didn’t? What does it mean to be forgivable? What can’t you yet forgive?

This entry was posted in Uncategorized and tagged forgiveness, memory, trauma aftermath. Bookmark the permalink.

2 responses to “the pieces we can’t forget”