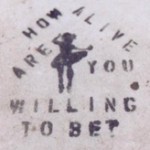 April is both National Poetry Month and National Sexual Assault Month — and, as a result, I’ve often thought of it as Writing Ourselves Whole month. I’m beginning to come out of my hibernation — here’s a little of what’s coming up around these parts:

April 29: Perverts Put Out – PERVERTS PUT OUT!’s MAYDAY! EDITION: The First of May is traditonally Workers’ Day and this year marks a national day of resistance. And hey, it’s spring and the sap is rising! Perverts Put Out! celebrates all that…and more. Co-hosts Dr. Carol Queen and Simon Sheppard and some of the world’s most brilliant pervert performers will fly the flag of lust-soaked resistance. Join us! Saturday. April 29th, 2017. Doors 7:00, show 8:00. At The Center for Sex and Culture, 1349 Mission Street, San Francisco, $10-20 sliding scale, no one turned away. (Show’s always a benefit for the Center for Sex and Culture).

And watch this space for more information about upcoming writing groups, including the first Write Whole: Survivors Write since 2015…