loving a friend from far too far 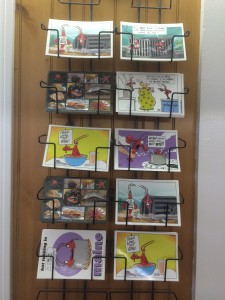 This is the postcard display at the Lobster Shack down at Two Lights in Cape Elizabeth. All but two the postcards feature Jeff’s cartoons.

I have been finding my friend Jeff’s cartoons everywhere around Portland since we got here a week ago – his work is on magnets and shot glasses and pint glasses, coasters, sweatshirts, calendars, playing cards, coffee mugs, and more. I was so excited to find how big he’s hit it, how broadly his products are available now. Jeff creates cartoons about Maine: lobsters, moose, and the stereotypical Old Mainers show up in his panels. I’ve run across items adorned with his wisecracking characters in just about every touristy shop we’ve stopped into.

I couldn’t wait to write to Jeff and just be generally excited in his direction.

I thought the same thing when I was here a month ago. And last year, too. I really should write to him and tell him how great it is to see his work everywhere! But I hadn’t done it yet.

Back when I lived in Maine, Jeff and I were in a writing group together; we met regularly along with several other folks, gathering at different’ member’s houses or at local cafes (did we meet at cafes?) to talk about the work each of us shared with each other. We had someone working on children’s books, another who wrote sci-fi, fantasy, literary fiction, poetry — Jeff was working on horror, and I was doing whatever it was I was doing: poetry, maybe, or little things I called poetry, and some of my erotic fiction. I had found the group through a co-worker of my then-wife’s; that co-worker’s partner was in the group (our fantasy writer: amazing). Over the time that we were in the group together, Jeff and I got to be friends. He was a bearish sort of guy, a little taller than me, bearded, with eyes that sort of sparked when he talked to you, and he loved to laugh and to make other people laugh. He was ten or so years my senior, lived alone in — Falmouth, was it? We met now and again outside of the group, to talk about life and relationships and the deep desire we each had to get our writing out into the world. We were writing friends; I thought he was funny, supportive, and deeply kind and caring. We stayed in touch, just now and then, after I moved; he sent emails periodically, reminding me that he wanted to get together when I came back to visit Maine.

But I didn’t go back to visit Maine for a long time after my ex-wife and I split up. I felt like Maine was hers, like I didn’t deserve it anymore, like part of my penance for how I ended our relationship was to cede the whole state to her (please note that she didn’t ask any such ridiculousness of me).

Once I did go, though, with my subsequent partner, and I met up with Jeff and my ex-wife’s former coworker’s partner, R, at a Sudanese restaurant near the Old Port. As delighted as I was to see them, I was also ashamed. I assumed that R would have some allegiance to my ex-wife, given his partner’s connection to her, and I was waiting for my former writing compatriots to judge me. (Judge me for what? For leaving my wife – the person to whom I had said forever, for getting immediately involved with a coworker of hers after nursing a crush on this person for months prior to my marriage ending, for not telling her about this relationship, for all of it. Who was doing that judging, though? That’s right. I was.) The meal was difficult, uncomfortable. I didn’t know what to say to these once-upon-a-time writing friends. I felt like I should be explaining myself and my relationship actions, though no one had asked me to do so — my Maine friends just wanted to know how I was doing, wanted to tell me how they were doing. But I was so spun up in projecting my guilt onto them that I could barely taste my food. Jeff and I hadn’t gotten together since.

We had a couple of exchanges via Facebook in the last few years, I think. At some point in the last year, I’d posted a photo to his Facebook page, an image of a book of his cartoons I’d seen in the Portland Airport, or maybe it was the picture I took of someone in Oakland wearing a sweatshirt with one of his cartoons on it. He didn’t reply, but I didn’t think about it — after all, it’s not at all uncommon for me not to respond to friends, even though I am very glad to hear from them. And I was getting ready to finally be ready to get in touch with him when I came back to Maine for these long visits. I’m like that – I can go years between contact with the people I call my friends. The folks who I can call best friends are the ones who put up with this from me, who don’t give up on me, who can pick up where we left off when finally I make the call or send an email or make a lunch date. Sometimes I call this being a terrible friend. Other times I call it being an introvert writer. Still other times I call it being a survivor who isolates by way of survival. Still: I was looking forward to finally reconnecting with Jeff. I wanted to make amends for that last dinner, explain my distance and behavior, and then introduce him to my new love. I wanted to hear what was going on with his life, and celebrate the success he’d found with his cartoons.

I had noticed that his cartoons weren’t carried by DownEast Magazine anymore, and I wanted to ask him about that, too. Was there some sort of falling out? Political differences? What happened?

A couple of days into this trip, my sweetheart and I were heading into Portland for a date night: we wanted dinner at Hot Suppa and then time to wander around a local bookstore. I looked on Google and found several bookstores in the city that were new to me, including The Green Hand Bookshop, which looked fantastic and right up our alley. Unfortunately, they were closed by the time we were heading into the city, but when I looked at their website on my phone, there was my friend Jeff’s name in the first paragraph of one of the blog posts, plus Jeff’s picture. Oh cool, I thought — Jeff’s connected with this bookstore! Maybe he helped open it, or —

And then I opened the blog post, and discovered that my friend Jeff had died. Back in April of 2014 — over a year ago — he had a heart attack and died while driving himself to the hospital. I felt a stun rush through me. I looked up his name and read the articles that ran after his death in the Portland Press-Herald and the Bangor Daily News. I read about who he was to so many people who loved him and stayed active in his life. I caught the summary, having missed the main screening.

I missed him. I missed my chance to say hello again, to say nothing of being able to say a truly open-hearted goodbye.

I’ve got no moral to this post. Of course, I keep telling myself that I need to contact everyone I’ve been out of touch with and tell them hello, tell them I love them, tell them I still think about them often (it’s true) even though I haven’t been in touch in ages. Mostly, right now, there’s a sadness resting heavy in my chest made up of regret and disappointment, more for him than for me. Fifty-five is too young. He should have had more life. Good night, Jeff. I hope you’re writing hard and laughing harder wherever you are now. I’m so grateful I got to know you when I did.

This entry was posted in Uncategorized and tagged friendluv, goodbyes. Bookmark the permalink.

One response to “loving a friend from far too far”