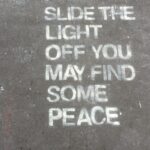 Then there’s the metaphorical breaking of silence, when a group of people begin to tell stories about their reality, about their lives, that have been shoved to the side or ignored for years, for generations, for millennia. These stories begin to fill a void that we hadn’t realized we carried in us, or that we had carried so long that we’d forgotten. As long as those stories remain untold and unlistened to, unattended to, the culture around us can continue to pretend that the harms it causes don’t exist, can continue to run along unabated.

I have been inhabiting and struggling with this second sort of silence for over a year now. Maybe you have, too. After four years (or forty, or four hundred or four thousand years) of listening to utter madness being fed to us as sanity and the “best thing for our country,” after being forced to accept the constant ravings of a sociopathic rapist child-man and all of the boot-licking, murderous, sycophantic lackeys and yes-men/yes-women that chose to surround and support him, after still more and more police murders of unarmed Black people, after more Indigenous women went missing and unsought, after the caging of the tired and poor and huddled children yearning to breathe free – and so, so very much more, more horror and indignity every single day – maybe something in you also went very quiet.

Maybe it’s a very old quiet, a deeply protected place inside, the place that was protected also during violence in childhood or sexual assault or the hundredth time your former partner told you that you were stupid and would never be able to survive without him. Maybe this quiet I’ve been moving with and through is kindred to that older one, the one we carry within us like a flame when all the while we have to pretend to be ok, pretend to be functional, pretend to be someone that we are not.

That silence is like cupped hands around something very precious, keeping safe the thing in us that can never be raped or berated or broken or beaten or blown out. It is the heaviest truth of us, and when it cannot be safely spoken or shared, we have to tuck it deep inside us and allow it to keep burning unnoticed, safely hidden away.

We are just coming out of a long national nightmare. That’s what headlines and our mainstream cultural story wants us to say right now. But the truth is that the last four years were just the continuation of a nightmare that has been ongoing, and we who are survivors of trauma and sexual violence and/or racist hatred know that now that there’s a new administration in the White House in Washington DC, the violences that were occurring everywhere, every day, before T*ump are still occurring now.

(And yet and still: there is something to be said for getting away from the bad man, for sending him packing out of your house, for being able to wake up without hearing his voice first thing in your ears, without having to fall asleep with his the last words you read on the blue screen you hold sacred by your bedside.)

We as a nation are profoundly traumatized – not just by the last administration and its murderous so-called policies, which led to 500, 000 mothers, fathers, children, nieces and nephews, aunties and uncles and grandparents and best friends and beloveds dying from a disease we knew how to protect ourselves from.

And we as individuals are traumatized as well. Of course we are. We have been separated from one another in order to keep each other alive, during a time when we needed to come together to raise our voices against greed, against white supremacy, against stupidity and violence. We are traumatized knowing that some large percentage of our country still believes in the lies told by an actual madman who we had to let occupy our White House. We are carrying enormous rage and grief and loss. Sometimes what we have to say is so big we don’t even know where to begin. Silence can come in then, as well, to sit with us while we find our way back to the words.

And, outside of the national and global violences, there are the individual traumas and histories we each carry, which have been triggered, maybe daily, maybe multiple times a day. We have learned that we need some distance from a traumatic experience in order to begin to heal from it – but what happens when the violence is daily, and we begin to fear that it will never end? We are walking books of adrenaline and cortisol, and have been distanced from so much of what has helped us to survive over the years: beloved friends and community gatherings, family, exercise. God help me, I have actually missed being able to go to the gym, as well as going to cafes to write, and hugging my friends (which I wasn’t even able to do when I was climbing onto an RV and about to leave my CA home and drive cross country to the place where I’m living now).

Words fell away from me, too, early in 2020 — and not just creative, generative words. I mean also the words to return emails and phone calls. It was hard for me to find the motivation to sit down and write – what difference did any of it make? What difference had any of my words made, if this was the world we were living in? I baked, instead, and walked with my dog, and watched the same shows I’d watched a hundred times before, and I began to wonder if words had left me for good. I’d open my notebook now and then in the morning, and then would sip my tea and look out the window, watching the light come up on the privet or the eucalyptus, and just breathe.

Once the folks at my job were sent home to work, it was somewhat easier to create space for morning writing – I didn’t have to rush through the pages in order to make it to BART or onto the highway by 5am in order to beat the worst of the morning commute. In the morning pages there was room for exploring this silence, the contours of my burnout, the shape of grief and worry that had lived in me for so long. Some mornings, I tried writing a blog post, but I’d trail off, back to silence. The notebook – pen and paper and candle and tea, that practice I’d been cultivating for such a long time – was what could hold me as I worked to write myself through this big silence inside. And once we moved from California to the East Coast, I continued my morning writing practice. I tried not to force myself to do “real” writing (as I am still working to uproot from my psyche the idea that journaling isn’t real writing), tried not to beat myself up for not posting to the blog or writing newsletters or otherwise getting work out there in front of people. But because the workshops had ended and I was not trying to make a living from my writing for the moment, I was able to let that internal pressure fall away, again and again (even if just briefly; naturally, it’s an ongoing struggle, wrangling with the voices that want to remind me how lazy and unaccomplished I am).

Have I written this before? We don’t call the fallow winter field lazy or unaccomplished. We understand that fields must have fallow times, to replenish, or their nutrients will be stripped and they will no longer be able to produce during the planting and growing seasons. The bulbs I put in the ground last fall are not lazy because they didn’t pop up into leaf and blossom overnight; they have to overwinter, they have to do their growing out of sight for many months before they will push their green fingers through the snow. But it can be so difficult to apply the same logic of nature to ourselves, as though we are somehow separate from the natural world, as though we do not have within us cycles of growth and rest, seasons of production and seasons of replenishment. We live during a time of such profound technical advancement, and we are now expected to produce, produce, produce, produce: you have no excuses anymore—you should always be closing. But we are not machines, no matter how much Silicon Valley would like to turn us into fodder for their vast databanks and advertising industries. We are human animals, and we need silence and rest as much as we need stimulation and creation.

Over the last month or so, something shifted. Something had room to shift. I’ve started returning to old writing, have begun submitting again (two rejections already, hey!), and am generating pieces to post to the blog or to Medium: against hustle culture, about recovering from burnout, about the transition from California to southern Maine (case in point: it’s going to get into the 60s in Berkeley today, near where I used to live, and it’s snowing outside my window here in Maine), and more.

I am grateful for the patience to let the words come back. It feels similar to the relationship I have built with my depression – over the course of many years, I have learned that my depression has its cycles as well: though may have times that are heavy with sadness and despair, these times won’t last forever; I’m able to trust that I will come out of it into a body and experience that’s more energized, and has more possibility in it.

Maybe you are still in the middle of a long silence. Maybe mine will return. I’m going to try to remind myself to breathe, to make room for morning pages, and to let myself set the pressure down. It’s easy to forget these things amid all the noise we live within, but we can step away from that noise, even for brief moments, and allow ourselves to trust the silences that hold us, the hands within that are cupping our creative flame, trust that our genius can never be blown out, no matter how loud the winds outside become.

Be easy with you, ok? I miss you. Keep breathing, and trust in your own rhythms, and your own inner flame.

This entry was posted in Patreon and tagged begin again, daily practice, silences, trust your struggle. Bookmark the permalink.

3 responses to “after a long silence”