um … this is not a witch hunt 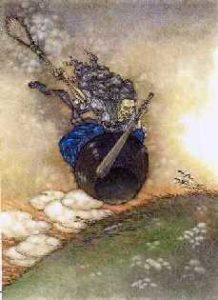 If it’s a witch hunt you want, let’s get Baba Yaga on the job…

Good morning, good morning. It’s very quiet here, except for the wind, which is a rush and howl through the trees, up the hillside. The eucalyptus dance like coral underwater. It’s all so beautiful, except that these same winds are whipping up the fires in Southern California, just as they did in Sonoma. What a painful, frightening, difficult season.

I get a little bit nervous whenever I hear folks, especially a group of men, talk about all the sexual harassment scandals (“scandals”) in the news right now. There’s panic in the streets because a very, very small handful of men have been called out publicly and some even smaller number are suffering some negative consequences (golden parachutes, extensive paid “leaves of absence” and the like don’t really qualify as negative in my book, though). A tiny number of sexual assailants have lost their jobs.

But this tiny number is greater than zero, and so now we are hearing men raise the alarm about a witch hunt.

A witch hunt. If that doesn’t add insult to injury.

If I am to understand this phrase in this context correctly, what those who use it seriously mean is that they’re afraid that women will look around them and see evidence of sexual violence behind almost any action a man makes, no matter how innocuous or innocent—every joke, every hand on the shoulder (omg Garrison Keillor), every even side-glancing reference to sex will be used as evidence that a man is akin to the most violent back alley knife wielding rapist (as though those are the rapists and violators most of us really have to be afraid of), and they’ll be pilloried ion social media and maybe even asked to look at their behavior, asked to (gasp!) reconsider their actions and act differently in the workplace or even with friends or — oh no — at home! They might even lose their jobs!

Do you know what they won’t be? Killed, like accused witches were.

Do you know who got (and still gets) witch-hunted? Women.  To draw a comparison between what is happening to an almost infinitely-small percentage of sexual abusers the world over and the murder of over ten million women who were stoned, drowned, raped, hanged, burned alive, tortured , or otherwise killed or maimed—very likely, in not a few of those millions of cases, because they refused a man’s sexual advances—is almost beyond-the-pale insulting.

Using “witch hunt” in this current cultural moment, is intended to diminish the actual historical atrocity that the phrase describes while simultaneously elevating the status and pain of those few, overly-powerful men who have, for this moment, at least, been brought low (-ish). We are intended to see them as persecuted without cause, and we are asked to be very careful in our accusations toward additional men, lest we fall into the same trap that men did (not all that long ago, actually).

Do what we say, the patriarchy tells us, not what we do.

I’d like the assailants and their apologists to find another phrase. Call your fear something else. Sexual-abuser hunt, maybe. It’s simple, direct, clear… just what you want in a slogan.

The reason this phrase is being used right now, of course, is to make women and other survivors more afraid of coming forward—it’s meant to paint them with the witch-hunter’s brush. Of course it’s the accusers we should be looking at with suspicion, the victims who are speaking out now (and have been speaking out for decades, and longer) and finally being attended to and believed (well, sometimes, and some of them, and not really), and not men who have been raised in a culture that indoctrinates them into the belief that they get to do what they want with their body or anyone else’s body.

Asking men to reconsider this indoctrination, to shift their conception of masculinity, and to stop fucking, touching, easing or threatening with or through sex is not akin to witch hunting.

Don’t let them fool you. This is not a witch hunt. This is a truth telling, and it’s barely even begun.

This entry was posted in Uncategorized and tagged bring them all down, patriarchy 101, turning the tables, watch their language, witch hunt. Bookmark the permalink.

One response to “um … this is not a witch hunt”