the other half of the country said No 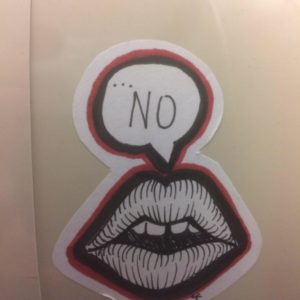 What is there to say? What can we who didn’t want this possibly say?

I haven’t looked at the news yet this morning.  I was up until after 1am, just scrolling through Facebook and Twitter feeds, trying to find something. Solidarity. Hope. Someone announcing that there had been a mistake, that a cache of uncounted votes had been located, that disenfranchised people were going to get their constitutional rights back just in time to make a difference in this election. That this was a mistake. That he announced immediately that it was a joke, he was just kidding, god, he never actually wanted the job. I wanted someone to announce that it wasn’t really happening. That I was dreaming.

I got more and more numb as the evening went on. I didn’t want it to be true — this isn’t really happening, is it? More than half of the American people who voted weren’t actually voting for this man, were they? Weren’t actually telling him that his actions were acceptable, even admirable? Weren’t telling him that it was just fine for a man who said “I could shoot someone on Fifth avenue and still get elected” to actually hold the highest office in the land? I don’t have to list all the horrors for you. You know what they are. They’ve been in the news endlessly, repeated, mocked, memed, lampooned, shared with disgust, fear, astonishment — and still, here he is.

White people voted for him overwhelmingly. This wasn’t a landslide of sexism. Last night a friend said that more men had turned out to vote in this election than in any other in American history — and that they were voting for this man. But have you seen the infographic making the rounds that shows whites overwhelmingly voting red, and people of every other race voting blue? We can talk about sexism and misogyny, of course we have to talk about sexism and misogyny, but we also have to talk about racism. This was (is — goddamnit, I don’t want to have to use the present tense) a victory in our country for white nationalism.

I have felt horrified and disgusted after elections before. I called W. “Resident Bush” for all the years he was in office. I woke up after the Supreme Court made their decision similarly furious that Bush and his cronies got to gloat, got to win, got to stand in front of the American people and pretend like they earned something.

But something about this morning is different, of course.

This is a man, openly endorsed by the KKK, is going into the white house. There’s something I want to say about never underestimating power’s rage, how hard power will fight, how hard people will fight to keep their power. Can it be  that millions of American citizens love and admire the fact that this man stands up in front of them and openly mocks his opponents, threatens to harm them, encourages violence against them? Can it be that they want an America that looks and sounds more like what this man does and says?

My limbs are numb. I am too afraid to even be aware of feeling afraid. But under that, I am so fucking angry.

This is a vindication for Brock Turner, Bill Cosby, Woody Allen — this is a vindication for all the rapists. Let’s be clear: there have been rapists in the white house before. Probably most of the time that there’s been a white house. But can we at least state with certainty that there hasn’t ever before been a president who stood in front of the country and, when it was revealed that he had bragged about sexually assaulting women, bragged that he would and should have sexual access to any body that he wanted, said it was ok because other people (a former president) had done worse. He hid behind the stories of women who Clinton assaulted, and then he threatened to sue the women who came forward to tell their stories of his assaults. So, it’s a new thing to have an out, admitted rapist in the white house. I’ve decided to call him Rapist in Chief. How grand for us as a nation.

Of course, we’ve also never before had a president who has never held any kind of elected office. We have decided as a country that we value someone vulgar and unprepared for the office over someone who has been learning the ins and outs of the american governmental system for forty-plus years. We want someone who has filed many times for bankruptcy, we want someone who fought to keep from paying his workers even four dollars an hour, who would regularly refuse to pay people with whom he had contracts — this is the man who is going to bring jobs? Are there truly people who believe this?

What is the point of saying all of this this morning? Of rehashing what we already know?

Here’s what I thought last night: we are going to have to fight like hell for the many communities who are now under threat. Let’s not make any mistake — these are the same communities who have been under threat in this country forever: folks of color, women, immigrants. But our rapist-elect has said explicitly and openly and repeatedly that violence against these communities is acceptable. Who knows what the next four years will bring? Any of us with any measure privilege are going to have to put ourselves on the line, to stand with those who will be under assault. We have already seen violence done explicitly in this man’s name — what will happen now?

This is what we as a country have reaped – white supremacy (back) in the white house. What are we going to do about it?

I saw many posts last night in my Facebook feed encouraging folks not to grieve, but to organize. Protest. Fight back. And we will organize. We will fight back. We will spend a generation fighting back against what he and this congress is about to unleash. And we must grieve also. We must mourn.

It’s ok to take some time to sit in whatever emotions are up for you this morning. Write them, if you have it in you to do so — maybe not publicly, if you don’t want to, maybe in your notebook. Scrawl it out. Shout into a pillow. Consider how you’re going to do holiday meals with people who voted for this man, this government, if you have to — my home state went quite red, and I’m sure there are those among my kin who voted for this now rapist-elect. What will I say to them? How do we as a country so horrifically divided find a way to speak across these divides? I heard a reporter on NPR last night speaking to a Republican official; this official was wondering how the rapist-elect (he didn’t use that term) was going to reach across and help to heal the divides in this country. And the reporter said, “But does he really want to do that? Does he really want to heal anything? Isn’t this divide part of what got him elected? Isn’t this part of what he worked for, what he wants?” The government official didn’t have a good answer for that.

I haven’t looked at the news yet this morning, though I know that I have to. I know I’m going to have to see his face, hear his voice, now, for the next four fucking years, listen to him gloat about winning the country on a platform of exactly nothing. So much for his brand being ruined. So much for polls, predictions, all those pundits who told us this wasn’t going to happen.

I guess what I want to say today is that I’m outraged, and I am not surprised, and that lack of surprise is a terrible feeling. I didn’t want it to be true, that our adolescent country would go for brash bullying and farcical pretense over any kind of substance whatsoever. The white men won yesterday (and the white women stood with them, and helped).

This morning I am turning to Sharon Welch’s book, A Feminist Ethic of Risk, for words to help me remember how to hunker (back) down for the battle — this battle isn’t new. It has been going on for hundreds of years. Welch says that our “situation calls for an ethic of risk, an ethic that begins with the recognition that we cannot guarantee decisive changes in the near future or even in our lifetime. The ethic of risk is propelled by the equally vital recognition that to stop resisting, even when success is unimaginable, is to die.”

In the next paragraph she says, “As we, too, resist the evil of racism, seeing its connections with other forms of structural oppressions, we need to learn that failure to develop the strength to remain angry, in order to continually love and therefore to resist, is to die […] for if we cease resisting, we lost the ability to imagine a world that is any different than that of the present: we lose the ability to imagine strategies of resistance and ways of sustaining each other in the long struggle for justice.”

We cannot give up. Many, many people were galvanized last night (I can only hope). Many more will be. We will have to raise our children with the language of resistance, with the models of social justice warriors who came before.

This entry was posted in Uncategorized and tagged grief, rapist-elect, white people's work. Bookmark the permalink.

One response to “the other half of the country said No”