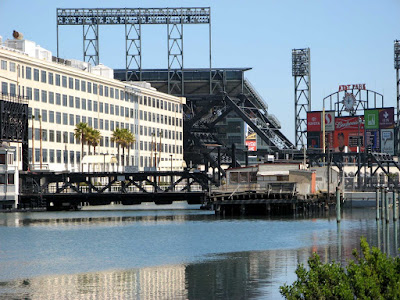 this is now where my phone lives

So yesterday I dropped my phone into the wharf out by the Giants ballpark.  Bye-bye phone. I was out there having lunch, outside in the intense heat. Everything upset me yesterday: the heat, the fact that I had to be at my job at all, the fact that I couldn’t get caught up on my writing ourselves whole work, and I was cranky and crabby and premenstrual-y and weepy. I had a short conversation with F!, during which I was curt and irritated and then after, I stood up, had my phone in my hand, was near the edge of the water, and I dropped the phone and thought, or no, I had thought before it dropped, it would be just like today for me to drop my phone in the water — and then that’s exactly what happened. Actually, it’s like when I dropped my phone in the sewer grate — I saw the grate, I thought, it would be awful to drop my phone down there and then I did just that.

I watched the phone go, I said, No, no, no but quiet, like I could get it to bounce back to me, but I didn’t want to alert the other people sitting at benches around me, and then it fell into the water and was gone. There were bubbles as the air escaped from between the case and the phone.

I’m sorry, ocean. This is the second cellphone I’ve fed you. I don’t know how many chemicals and awful metals are in that thing that are now going to decompose in you and poison your children. I’m sorry.

Even before that, though, I spent most of yesterday sad and upset. I know it was period hormones, but this time usually just releases what’s already inside. I’m tired of  having a secret everywhere I go. I’m tired of always being pulled in multiple directions, always multitasking, never being able to just focus on my work.
And then last night I watched 2 or 3 grey’s anatomys, until I cried and cried. I cried for how overfull my life is now and I cried for before, for being a kid who had to do the things I did, for being someone no one cared to check in on. I had a flash of my mom’s best friend, and thought, I could call her and ask her what happened. Why didn’t anyone check in on us, why didn’t she worry about her best friend’s kids? I could ask her what were mom and dad like before, before my stepfather took everything over. I thought, I could go there. I could ask her. And then that made me so sad: it’s so many years later.

When F! came out and found me by the back door, sobbing, it was because I don’t have any connection with the place I come from — it’s so faded and tenuous. I had to leave there to survive, and pulling up your roots like that is another form of suicide, another death. It had nothing to do with gayness then, but it has something to do with gayness now, the not really being able to go back. The how awful my father is with my queerness, how awful so many of the people there are. How I say I’m from Nebraska but I hardly feel it most of the time — my tethering is in New England. And how much I miss the place I’m from, how much I miss having a sense of connection and history, a sense of being attached to somewhere: and that’s as much about the people as about the place. The people become the place. In New England, there are people I love and who love me, who help tie me to the ground, the mountains and smells — and, too, New England is the place that was about escape for me, and so being there is always inflected with triumph and loss.

Being home is only about how much isn’t there: how all the friendships I had in high school were halfway, if that, were only half hearted, because the rest of my heart was tied up at the house. How do I want to say this: being home is all about being in the place where people let me go, let my sister go, let us fall. Over and over: our parents did, all their friends did, every adult did. That’s what adults do, they let children fall and if the children don’t die, then the children learn good survival skills and they go out into the world. (I’ll be clear here that I understand that this isn’t true for all children nor all adults, and yet, it’s really really fucking common, isn’t it?)

I’m never especially sad about losing a phone — the quiet is always useful. Not having that phone will be a break from always  being online, always being on email. The cost, the expense, is a drag, but that’s just not the end of the world. I’m glad for the space to cry, to push out one more piece of the sorrow.

(Thank you for being there, today, yesterday, and tomorrow.)

This entry was posted in Uncategorized and tagged the personal is political, trauma aftermath. Bookmark the permalink.