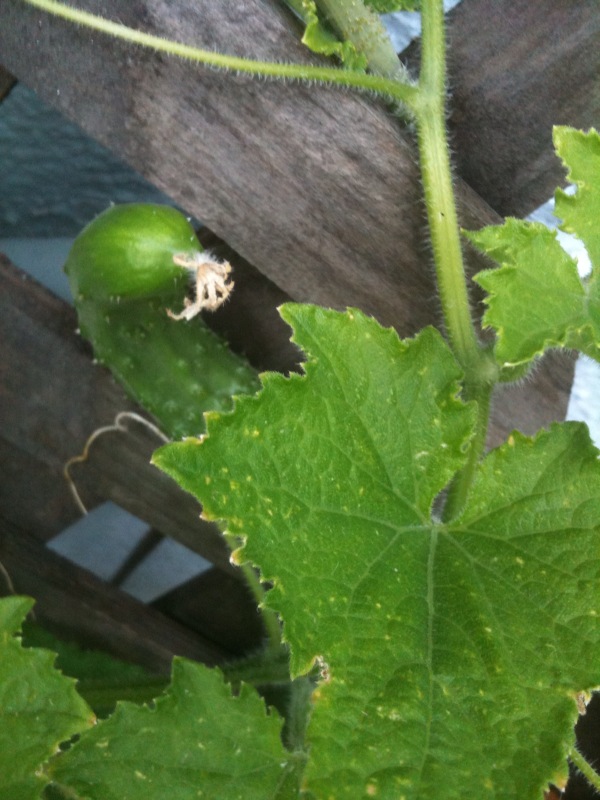 This morning it’s dark enough at 5:35 am that it makes sense for me to have a little candle at my writing desk, which makes it feel more like I’m up with the “holy dark.”  It’d be quiet outside in my little San Rafael neighborhood if not for the loud industrial garbage truck, chewing and hollering its way through the early morning.

There’s a creek that I pass on the way to the bus stop in the mornings, it’s a block away, loaded down and over-banked with trees, and the water’s clearish enough that I can see that there are no fish there, very little apparently living in the water.  The mallards like the small sand bar.  It’s a tidal creek, which is something I continue to appreciate about so many of the bodies of water around here — the idea that they’re breathing with the bigger tides, are connected that way. Lake Merritt’s like that, would be shallower some mornings on my way to BART, and other mornings would be full up around the legs of egrets and herons.

Yesterday there was a turtle floating in the water, floating horizontal, head just poking out up into the air. I’d been looking for, hoping for turtles, wanted the little sand bars and side-of-the-stream rocks and logs to get cluttered with their roundness on hot days.  This is the first one I’ve seen, but I think I’m hopeful (could I be hopeful, do I want to be, after reading Derrick Jensen yesterday)? I think I’m gratified, I think I’m just glad. Glad that something’s living in the water, the water’s not dead.

Last night, my bus got in at about 10:30, and so I said hello to my little garden in the dark.  We’ve got space enough to grow things here, but I don’t know anything about the soil, so until we can get it tested I’m planting things in containers.  I have a small, overcrowded pot of lettuces just now bolting, a bucket of tiny chards, a tall, flowering and spindly tomato plant, a jalapeno plant, cucumbers vining over an old piece of short fencing and in amid the rest of the containers, purple string beans (that grow from light purple flowers, and that turn green when you saute them with a little garlic, in olive oil) — and a pot holding something that was supposed to be a melon, and then I thought might be eggplant, and now that I’ve given it its own growing space & good soil, I see is actually a weed.  Ah well.  I’d planted seeds that I brought with me from Maine, so they were at least six years old; the only things that grew from those seeds were a couple of wild flowers — some clover, a couple daisies.  None of the melons or peas even sprouted. 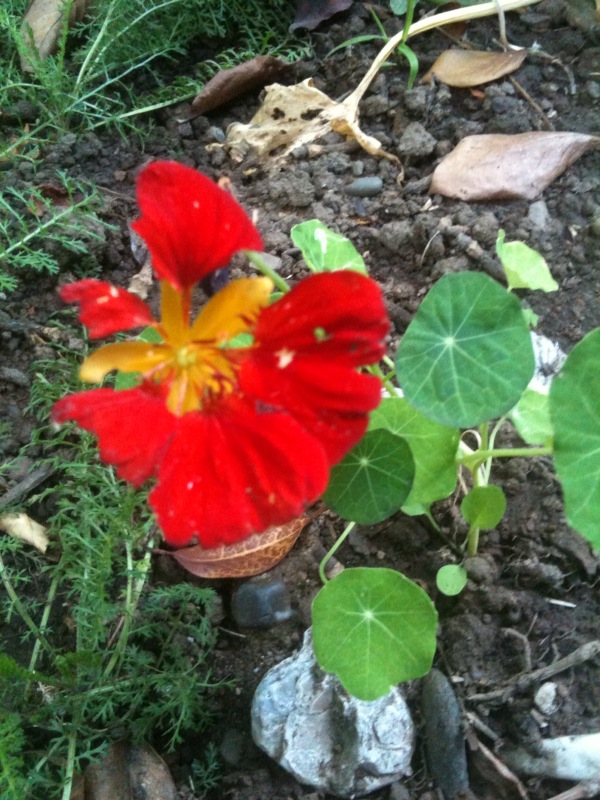 My little flower garden in the back-back, the second backyard behind the studio, is slowly spindling itself along.  I’ve got a few callas, the clover and daisies, plus some borage, yarrow, and nasturtium.  I want a little path back there, something to mark the space between this that I’ve reclaimed or am resituating and the tough, lovely plant that had previously laid the whole area beneath the magnolia, live oak and apple trees. I don’t know what it is, but it grows in colonies, sending out shoots that are tough and difficult to loosen from the clay-y soil, and puts up a gorgeous yellow flower int he spring. I’d like some calendula back there, some echinacea, some mallow. Things harvestable, dryable.  Some oregano and Fresh! has been having a hankering for lavender, big fat sprays of it up in the front of the house. We do it little pieces at a time, as we have enough extra for another plant at the farmer’s market, as we’ve got seeds from a weed whose flower has past, as we’ve got a bit of plant that’s put out roots in the water, and I’m ready to risk laying it in some soil.

I wish I had my mother’s green thumb — she’s got the ability, or it has seemed to me, to turn any barren bit of land into something lush with chaotic order, new vegetables, flowering life. Every fall she’s overrun with her harvest, puts up veggies for the winter, stores apples and carrots and squash in her cellar.  I am grateful when I get one pepper that ripens, when the tiny chard reddens and lettuce ready to be thinned so that we can have a tiny salad; there’s something about the kind of attention I paid, I think, how in Maine I was out in the garden every morning, but it was wide enough that  you could walk through it, and for some reason the deer didn’t come into the yard and eat all my plants down to nubs, even though we lived right at the edge of some pine woods (and now here, in the just about middle of San Rafael, now we have to keep the garden fenced). There, I walked through the rows, picked off japanese beetles from the snow peas and dropped them into jars of soapy water, set down straw hay mulch, weeded around the tomatillos, the tomatoes, the black beans and soy beans.  I walked around the whole yard, checking  the wild things, too, the blueberries and raspberry canes. I only ever amended the soil with compost that we’d created — so I don’t know how amended to soil actually was, how healthy or fed.

Here I have enough time to say good morning to the buckets of life as I walk past to the bus. I make sure the new bed of seeds is still damp, and check the tiny leaved plants just beginning to sprout, but mostly I forget to do both of those things.  I’m running late, I need to get to the bus.  I see that the tomato, the cucumber, the pepper plants are still there, haven’t been reconsumed by the deer. I glance over the tomato — any little green lobes? I see that the soil in Stella bucket holding the chard is still moist — maybe too wet. Maybe there aren’t enough holes in the bottom, or they aren’t big enough.  And then I take off — I’m rushing into the city. But didn’t we move here so there’d be space and time for a garden?  What needs to change here?

I want big healthy plants, sturdy, solid. Plants strong enough to hold the life I’m asking them to produce for me. I need them rooted well — and so I shouldn’t be surprised that this is where my trouble is. We moved up here so that I could refigure what it means to root, to say, I’m gonna stay awhile, to trust a thing that could be called home. What’s next, then? Me and the plants learning to trust what we can dig our energies into, eating whatever’s given us, seeing what happens. 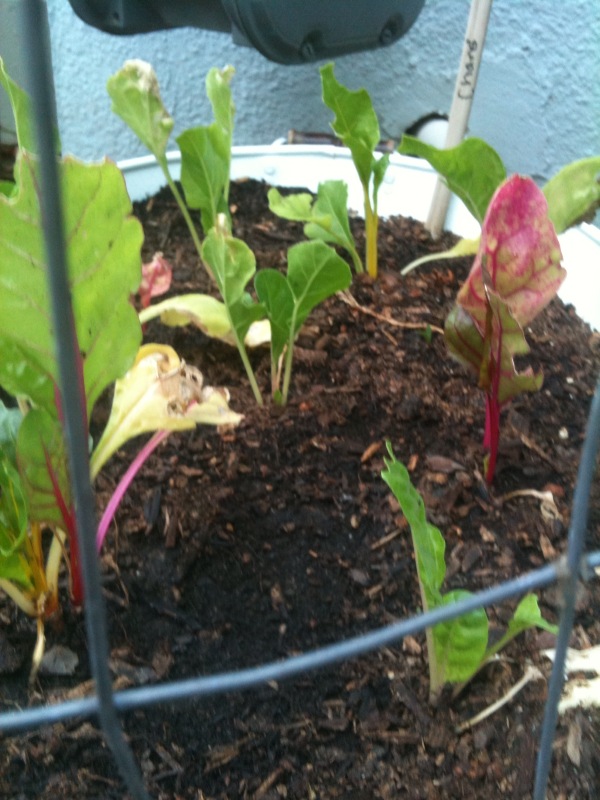 What I need is help — some fertilizer that isn’t made of poison, better soil, more knowledge. I’m of the trial-and-error school of gardening, just tucking a seed under the dirt and waiting to see what happens. Maybe nothing will happen.  Oh, well! But let’s say I wanted to use these vegetables to make it less necessary for me to buy stuff from someone else’s garden — then maybe it matters a lot what happens in these pots.  I’m learning about the dense clay-y soil up here, learning where to find better stuff. I hate buying dirt in plastic bags. It’s like bottled water — putting life into plastic and sealing it up, selling it for a million dollars. But a couple weekends ago we brought home three bags, one of composted manure (for the flower patches, the places with established plants, the places with no young roots that could get burned) and then two bags of potting soil. I spent the afternoon filling new planters Fresh! had found somewhere, after he drilled holes in the bottom, and then replanting the things that were getting overcrowded in their shared spaces.

That I’m thrilled every time there’s a new flower on any of the plants — I finger them, wanting to help with the fertilizing, I resolve to lant more flowers so that we’ve got more bees. I think I want to admit that I’m both an inconsistent gardener and a gardener in thrall — I adore those little plants, and I want to see what they’ll do next!  Yet, at the same time, they need some help, some food and water, to do the next best thing — and I don’t know what they need.  This here is a big reason I’m afraid to be a parent (there are so many reasons): I’d sort of want to just watch and see what happened next, how the child grew or investigated or attempted to get a response from the world.  If you don’t intervene, as a parent, you’re pretty much not doing your job at all.

My neighbor has a stalky tomato plant; its trunk is thick green, sturdy — and his chard looks like what like big chard leaves!  His chard are huge, fat, deep red. When I talked with his partner, she tells me he gets his soil from the local dump, makes a mix of that compost and something like peat moss — I’ll have to talk with him about what I can do with my little plants for now. There’s something here, about being willing to ask for help, about devoting both attention and time (and sweat!) to the things you’re growing new, to not knowing the answers, about learning what’s neeeded from the situation at hand. Amending my soil, and intervening where it could be helpful, knowing that’s not taking anything away from the plant itself. (I get it that I have an issue with control here, with power, and with a survivor’s ability to over-identify with everything.)

What’s your garden look like (either in life or in your imagination)?

This entry was posted in Uncategorized and tagged garden, home, playtime!, San Rafael. Bookmark the permalink.